Blogging is Bad for your Back 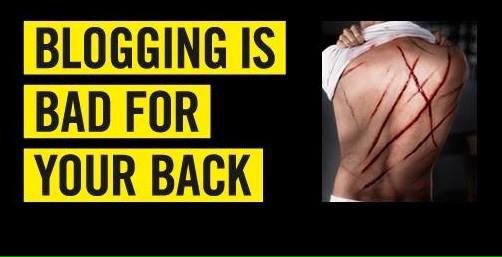 ‘Raif told me he is in a lot of pain. He said that when he was being flogged he took the pain silently and rose above it, so that history will know that he did not react to their punishment. His health is poor and he cannot take another round of lashes’

‘Raif raised his head towards the sky, closing his eyes and arching his back. He was silent, but you could tell from his face and his body that he was in real pain.’

If you want to know what the Saudi religous thought police were so offended by, The Guardian has some extracts here.

Reflecting on the role of the Muslim religious establishment on 12 August 2010, Badawi warned about the stifling of creativity:

As soon as a thinker starts to reveal his ideas, you will find hundreds of fatwas that accused him of being an infidel just because he had the courage to discuss some sacred topics. I’m really worried that Arab thinkers will migrate in search of fresh air and to escape the sword of the religious authorities.

Badawi argued on 28 September 2010 in favour of “secularism [as] the most important refuge for citizens of a country.” Urged by clerics not to attend “heretical” celebrations marking Saudi national day, he underlined the importance of separating religion from the state. Strikingly he does not attack the Saudi monarchy and even praises the liberal governor of Mecca, the intellectual and poet Khaled al-Faisal Al Saud.

Secularism respects everyone and does not offend anyone … Secularism … is the practical solution to lift countries (including ours) out of the third world and into the first world.

Badawi linked Palestine, one of the touchstones of Arab solidarity, to the question of political Islam, attacking Hamas.

I’m not in support of the Israeli occupation of any Arab country, but at the same time I do not want to replace Israel by a religious state … whose main concern would be spreading the culture of death and ignorance among its people when we need modernisation and hope. States based on religious ideology … have nothing except the fear of God and an inability to face up to life. Look at what had happened after the European peoples succeeded in removing the clergy from public life and restricting them to their churches. They built up human beings and (promoted) enlightenment, creativity and rebellion. States which are based on religion confine their people in the circle of faith and fear.

The only article of Badawi’s hitherto translated from Arabic into English denounces the demand of Muslims in New York that a mosque and community centre be built on the site of the World Trade Centre, where 3,000 people were killed in the 9/11 attacks by al-Qaida. It goes against the official Saudi position by linking the terrorist group to the kingdom – and accuses Muslims of intolerance.

What hurts me most as a citizen of the area which exported those terrorists … is the audacity of Muslims in New York that reaches the limits of insolence, not taking any regard of the thousands of victims who perished on that fateful day or their families. What increases my pain is this [Islamist] chauvinist arrogance which claims that innocent blood, shed by barbarian, brutal minds under the slogan “Allahu Akbar”, means nothing compared to the act of building an Islamic mosque whose mission will be to … spawn new terrorists … Suppose we put ourselves in the place of American citizens. Would we accept that a Christian or Jew assaults us in our own house and then build a church or synagogue in the same area of the attack? I doubt it. We reject the building of churches in Saudi Arabia, not having been assaulted by anyone. Then what would you think if those who wanted to build a church are the same people who stormed the sanctity of our land? Finally, we should not hide that fact that Muslims in Saudi Arabia not only disrespect the beliefs of others, but also charge them with infidelity to the extent that they consider anyone who is not Muslim an infidel, and, within their own narrow definitions, they consider non-Hanbali [the Saudi school of Islam] Muslims as apostates. How can we be such people and build … normal relations with six billion humans, four and a half billion of whom do not believe in Islam.

In the first weeks of the Egyptian revolution in February 2011, Badawi hailed the drama in Cairo’s Tahrir Square as an example to the whole Arab world. The Saudi government, by contrast, was horrified by the overthrow of Hosni Mubarak and delighted when Mohamed Morsi, the Muslim Brotherhood veteran elected to succeed him, was ousted.

It is a revolution, led by students and the marginalised, a revolution in every sense of the word … that is … a decisive turning point … not only in the history and geography of Egypt but everywhere that is governed by the Arab mentality of dictatorship and security. It is not yet clear whether is Egypt is about to change, but it is our hope that a new Egypt will emerge from the painful birth pangs its people are experiencing … after years of subservience and oppression.

In Sepember 2011 Badawi launched a witheringly sarcastic attack on Saudi clerics after a TV preacher called for astronomers to be punished on the grounds that they encouraged scepticism about sharia law.

Actually, this venerable preacher has drawn my attention to a truth that had been hidden from me and my dear readers – namely, the existence of the so-called “Sharia astronomer”. What a wonderful appellation! In my humble experience and in the course of my not inconsiderable research into the universe, its origins and the stars, I have never once come across this term. I advise NASA to abandon its telescopes and, instead, turn to our Sharia astronomers, whose keen vision and insight surpass the agency’s obsolete telescopes. Indeed, I advise all other scholars the world over, of whatever discipline, to abandon their studies, laboratories, research centres, places of experimentation, universities, institutes etc. and head at once to the study groups of our magnificent preachers to learn from them all about modern medicine, engineering, chemistry, microbiology, geology, nuclear physics, the science of the atom, marine sciences, the science of explosives, pharmacology, anthropology etc. – alongside astronomy, of course. God bless them! They have shown themselves to be the final authority with the decisive word in everything, which all mankind must accept, submit to and obey without hesitation or discussion.

In May 2012, shortly before his arrest, Badawi addressed the nature of liberalism

For me, liberalism simply means, live and let live. This is a splendid slogan. However, the nature of liberalism – particularly the Saudi version – needs to be clarified. It is even more important to sketch the features and parameters of liberalism, to which the other faction, controlling and claiming exclusive monopoly of the truth, is so hostile that they are driven to discredit it without discussion or fully understanding what the word actually means. They have succeeded in planting hostility to liberalism in the minds of the public and turning people against it, lest the carpet be pulled out from under their feet. But their hold over people’s minds and society shall vanish like dust carried off in the wind.

His final thought quoted Albert Camus: “The only way to deal with an unfree world is to become so absolutely free that your very existence is an act of rebellion.”

In another piece that month, Badawi invoked the Quran to support the importance of liberalism, the need to separate religion and state and implied that Islam itself has been distorted by the Saudi political establishment to promote illiberal and authoritarian ideals.

No religion at all has any connection to mankind’s civic progress. This is not a failing on the part of religion but rather that all religions represent a particular, precise spiritual relationship between the individual and the Creator. ..However, positive law is an unavoidable human and social need because traffic regulations, employment law and the codes governing the administration of State can hardly be derived from religion.

I don’t think the Saudi authorities wanted people to read what he was saying on his blog. Well they’re certainly reading it now aren’t they?