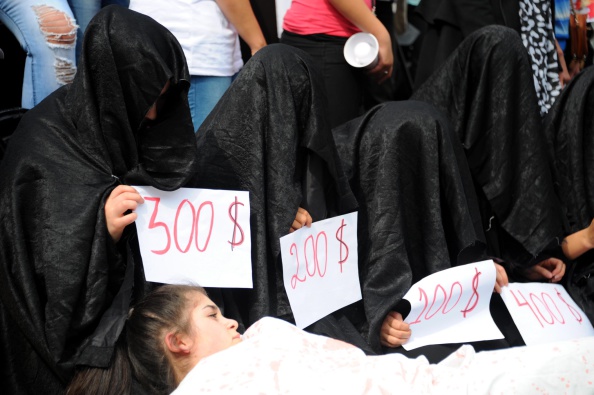 BRUSSELS, BELGIUM – SEPTEMBER 8: Yezidi women hold signs during demonstration against the attacks of Islamic State (IS) in Iraq in front of the European Parliament at the Luxembourg square in Brussels, Belgium on September 8, 2014. (Photo by Dursun Aydemir/Anadolu Agency/Getty Images)

Randa was abducted by ISIS from northern Iraq along with her heavily-pregnant mother. Forced into slavery Randa was taken and raped by a man twice her age.1 She’s 16 years old.

Esther Ruth Atim was kidnapped from Uganda when she was 9 years old by the Lord’s Resistance Army, a Christian militia. “Rape was on a daily basis. I was raped so I couldn’t even move…like a normal (person)…I could only move like a jumping frog.”2

Captured, sold-off, raped and forced into a life of servitude. Christian, Muslim, Ugandan or Yazidi this crime against humanity doesn’t discriminate.

The United Nations Security Council will meet to talk about human trafficking and sexual violence in conflict.

Swift action from the United Nations Security Council could prevent human trafficking and sexual slavery in conflicts all over the world now and forever.